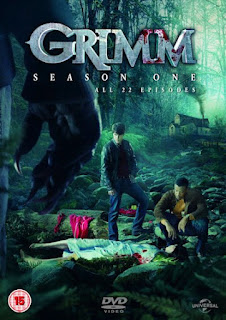 Be brave, sit tight and watch out as the fantasy drama series GRIMM, Season One hits shelves on Blu-ray and DVD on this October, courtesy of Universal Playback.
From the producers of Buffy the Vampire Slayer and Angel comes a dark and pulse beating adventure, set in a world where supernatural beings (GRIMMs) gorge on the City of Portland.

Season one begins as Detective Nick Burdhadt (David Guitolini) starts to see visions of people momentarily transformed into hideous monsters, but a visit from his only living relative reveals the truth about him belonging to a family of hunters, and his destiny to keep the balance between humanity and the mythological creatures. It's not long before his work as a policeman leads Nick to the criminals he once thought were only found in fairytales.
With help from his friends Monroe (Silas Weir Mitchell) and Hank (Russell Hornsby), Nick finds he must battle against an assortment of dangerous abnormalities, in an effort to thwart the evilness that lives in small town America.
Created by Stephen Carpenter, David Greenwalt and Jim Kouf, GRIMM Season One is the highest rated drama series on UK TV channel "WATCH", with over 1 million viewers tuning in each week and has just been renewed for a second series.
Grimm Series 1 is available on UK Blu-Ray, DVD, Digital Download and VOD from 22nd October.
Buy the UK DVD at Amazon.co.uk
Buy the Blu-Ray at Amazon.co.uk