Behold the artwork for the new horror/comedy "Stitches, starring funny man Ross Noble, one of the most anticipated films of the season from director Conor McMahon (Dead Meat). 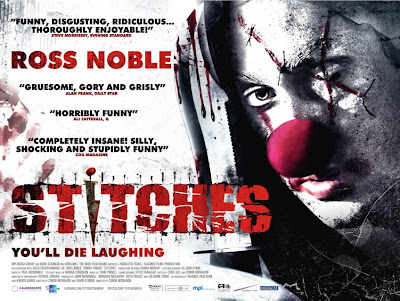 Synopsis - Jaded Richard Grindle (Ross Noble) is the sleaziest clown working the children’s party circuit in Ireland. Arriving late to one birthday, his timing is off, the bratty kids a nightmare and a prank goes horribly wrong - he falls on a kitchen knife and goes to that Big Top in the sky. Years later the same nasty kids attend another more grown up bash. Little do they know, thanks to a black magic clown cult, Stitches will be the uninvited guest of honour seeking revenge on those responsible for his untimely death.
Laughs and gore combine in this twisted tale which also sees some fantastic performances from its young and upcoming cast that includes; Tommy Knight (Doctor Who) and Gemma-Leah Devereux (The Tudors).
The film enjoyed a hugely successful screening at this year’s Frightfest and won TOTAL FILM’s ‘Best Death’ Award. Stitches will be released in UK cinemas 26 October.
Posted by Dark Angel at 11:34