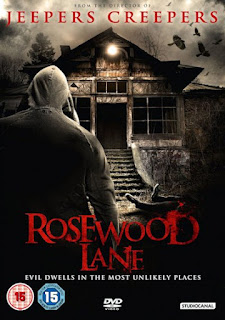 From the Writer/Director of Jeepers Creepers and Powder comes horror/thriller "Rosewood Lane", which comes to UK disc this Octorber.

Radio talk show therapist Sonny Blake (Rose McGowan) moves back to her childhood home on the seemingly idyllic Rosewood Lane after her alcoholic father dies. However upon arrival in the old neighborhood, Sonny discovers her neighbors are terrified of the local paperboy (Daniel Ross Owens).

She thinks this is ridiculous, until she encounters the boy himself. Sonny soon discovers that he is a cunning and dangerous sociopath, one who may have gruesomely killed her father...and others.
With the help of her close friend, Paula (Lauren Velez), protective former boyfriend, Barrett Tanner (Sonny Marinelli) and a couple of dubious cops (Ray Wise and Tom Tarantini), she sets out to discover the truth.
But the game escalates, and unbelievable horror ensue, as she suddenly finds herself in a terrifying all-out war. One that forces her to redefine her ideas of good and evil, and has her fighting to stay alive.
The film is released to UK DVD on October 15th.
Extras on the disc (TBC) include a making-of feature and a trailer.
View the trailer on YouTube
Pre-order the DVD on Amazon.co.uk
Posted by Dark Angel at 15:00