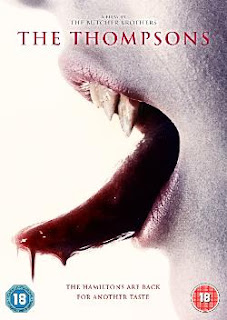 OK, you remember that wierd Vampire drama "The Hamiltons" by the Butcher Brothers, that came out back in 2006? Well for those of you pining for more, they've returned in this latest adventure "The Thompsons".

Re-uniting the 4 principal cast members, Cory Knauf, Samuel Child, Joseph McKelheer, and Mackenzie Firgens as the dysfunctional vampire family, a bloodbath at a local gas station means they have to go on the run, which eventually sees them resurfacing in the U.K. with a new identity as The Thompsons.

Desperate for protection in this unfamiliar country, the deadly family seeks out the help of a shadowy underground group rumoured to be sympathetic to vampires.

Set and filmed mostly in the UK, THE THOMPSONS  is a bloodthirsty, action-packed sequel from The Butcher Brothers.and is being screened at FrightFest on the 26th August 2012. With a DVD release available from 15th October.