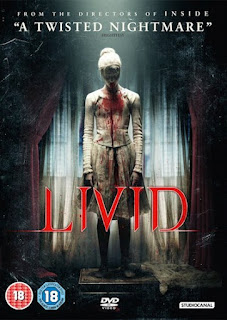 STUDIOCANAL recently got in touch to tell us about their new release "LIVID", which is being released on DVD and Blu-ray this month.

From the are producers of "INSIDE", Julien Maury and Alexandre Bustillo's,  LIVID, stars Chloé Coullaud as Lucie, an in-home caregiver in a gloomy seaside town in Brittany. Assigned to the estate of a Mrs Jessel. Mrs. Jessel lies in a cerebral coma, by herself, in her large desolate house. Lucie learns from her trainer that Mrs. Jessel, once a dance instructor who lost her only daughter years, has hidden a treasure in her home that she's holding onto as part of her final will.

Upon retelling this story to her boyfriend, William (Félix Moati), the two along with William's brother, Ben (Jérémy Kapone), decide to go to the woman's home late on Halloween night and find the treasure for themselves. As the house reveals itself to be increasingly peculiar, their hunt for the Jessel treasure leads them into ahorrifying supernatural series of events that will change Lucie's life forever.

Already screened to great praise at festivals, including Frightfest's Halloween all nighter, LIVID is a scary and visually stylish slice of gothic horror which should please gorehounds and art house buffs alike.

The film is released to DVD and Blu-Ray August 13.

Buy the Blu-Ray from Amazon.co.uk
Posted by Dark Angel at 18:05