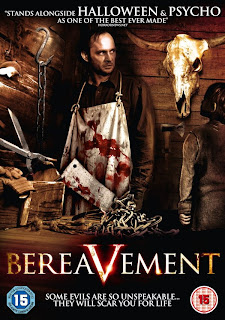 High Fliers Films recently got in touch to tell us about Steven Mena’s dark and harrowing "Bereavement" which they're releasing to UK DVD this October.

Young Martin Bristol has a rare genetic disorder that causes him to feel no physical pain. Graham Sutter is a deranged psychopath who kidnaps the young boy from outside his house and forces him to become an unwilling participant in the mindless slaughter of his innocent victims.

Abducting young women and taking them to his farmhouse in Pennsylvania for sacrificial slayings. His atrocities have gone unnoticed for many years, that is until bright young thing Allison moves into the area to live with her uncle and becomes suspicious of goings on at the farm.

Once Sutter’s crazed world has been discovered, all hell is unleashed. Can Allison save Martin or is he destined for a fate worse than death? This disturbing tale explores the effect that extreme brutality has on a young child who has not yet learned the difference between good and evil.