Soundtrack of "The Dead" to be released. 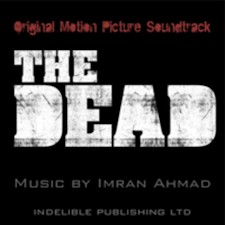 By popular demand, the producers of the much admired zombie survival flick THE DEAD are releasing the film’s soundtrack, which features a haunting original score from film composer Imran Ahmad, with vocals from top Eritrean singer Saba Tewelde and kora from Gambian virtuoso Jally Kebba Susso.
Howard Ford, the film’s producer and co-director, commented: “We were absolutely blown away by Imran’s unique and moving score for ‘The Dead’.  We simply had to release it because of the sheer number of people asking where they could get their hands on the soundtrack. Also with the US DVD/Blue Ray release coming up on 14th February the demand is likely to grow, so I hope people are as moved and haunted by this incredible score as we continue to be”.
Imran, who worked closely with Howard and Jon Ford added: “The music intends to reflect the beauty of the natural world turning into a twisted and distorted reality.  I hope the listener is able to share the journey across rural Africa that is portrayed in the film.”
The soundtrack is available to download from iTunes and Amazon from 12th December.
More info can be found here http://www.imranmusic.co.uk/