The Girl with the Dragon Tatoo - In UK cinemas Dec 26. 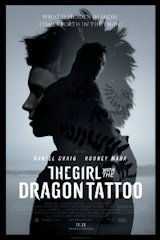 This English-language adaptation of the Swedish crime novel by Stieg Larsson follows a disgraced journalist, Mikael Blomkvist (Daniel Craig), as he investigates the disappearance of a wearily patriarch's niece from 40 years ago. He is aided by the pierced, tattooed, punk computer hacker named Lisbeth Salander (Rooney Mara). As they work together in the investigation, Blomkvist and Salander uncover immense corruption beyond anything they have ever imagined
The Girl with the Dragon Tattoo is the first film in Columbia Pictures' three-picture adaptation of Stieg Larsson's literary blockbuster The Millennium Trilogy. Directed by David Fincher and starring Daniel Craig and Rooney Mara, the film is based on the first novel in the trilogy, which altogether have sold 50 million copies in 46 countries and become a worldwide phenomenon.
The film hits UK cinemas boxing day.
Visit the official website at http://www.dragontattoo.com/site/

Email ThisBlogThis!Share to TwitterShare to FacebookShare to Pinterest
Labels: girl with the dragon tattoo daniel craig