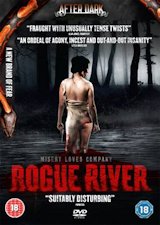 Wanting to scatter her father’s ashes at a significant place, Mara (Page) drives to a remote part of the beautiful Rogue River in Southern Oregon. When Mara’s car is towed away by over-zealous police she accepts the offer of a ride into town by a kindly passerby. First they must stop by his place though in order Jon (TEXAS CHAINSAW 2 and DEVIL’S REJECTS horror legend Bill Moseley) can tell his wife Lucinda what he’s up to.
So begins Mara’s nightmare descent into utter horror and disgust. For Jon and Lucinda aren’t what they seem and as they hold Mara hostage inside their house the shock twists and creepy turns begin. Your nerves will be stripped as bare as Jon and Lucinda dare when their clothes and wigs are removed, making Mara wish she had parked her car somewhere else.
If you’ve seen MISERY, you’ve seen nothing!
ROGUE RIVER comes to DVD & Blu-ray 16 January 2012 courtesy of G2 Pictures and After Dark Originals.
Buy the DVD at Amazon.co.uk

Buy the Blu-ray at Amazon.co.uk