Hammer Classics - Out on DVD Jan 16 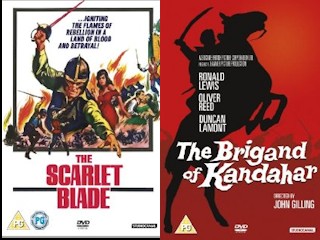 This January Studio Canal will be releasing on DVD for the first time ever the classic Hammer horror pictures "The Scarlet Blade" and "The Brigand of Kandahar".
Both films were directed by John Gilling from the famous Hammer Film Productions and star the legendary Oliver Reed!
THE SCARLET BLADE is a historical adventure set during the English Civil War. Oliver Reed is in devilish form as a Roundhead soldier who kidnaps the King on the orders of his tyrannical Colonel (Lionel Jeffries). It's down to a local group of loyal soldiers to rescue him, led by Royalist cavalier, known as The Scarlet Blade.
In THE BRIGAND OF KANDAHAR, Oliver Reed continues his villainous streak in another Hammer historical adventure. The setting is the Indian desert, where the British army faces scorching temperatures and savage warrior, Reed playing Eli Khan, leader of some local bandits that come to the aid of a disgraced British officer.
Both films will be out on January 16th
Buy the UK DVD of "Scarlet Blade" on Amazon.co.uk
Buy the UK DVD of "Brigand of Kandahar" at Amazon.co.uk
Posted by Dark Angel at 17:56