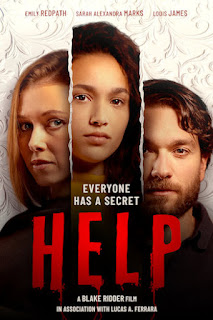 Ridder Films, in association with Executive Producer Lucas A. Ferrara, are delighted to share the new trailer and poster for their award-winning psychological thriller HELP, which will be available on digital download in the UK, USA and Canada from the 15th February (14th February on UK iTunes).

HELP was filmed over just 12 days. Due to UK lockdown restrictions, only 20 cast and crew members were involved. HELP is a testament to producing high-quality films during such a turbulent time.

A young woman's life turns chaotic when she uncovers a deadly secret about her friend...A painful break up prompts Grace to visit her friend Liv who is living in the idyllic English countryside with her boyfriend Edward and his dog Polly. The trio start the weekend in high spirits but soon turns into chaos, as well-kept secrets are exposed and the friends come to see each other in a whole new light. Everyone has a secret...

With a plot as dark as HELP’s, you might not expect to see former boyband member Duncan James' cameo, but the unlikely pairing came about organically. “I met Louis whilst filming in Liverpool, a mutual friend introduced us, and we immediately struck up a friendship”, explains James. “His passion was palpable and there was a lot of mutual respect. I watched his performance in a few of Ridder’s short films, such as ‘The English Teacher’ and ‘A Simple Robbery’ and thought he was great, so I wanted to support him and be involved in his next project”.