New film premieres and additions coming to SHUDDER this February 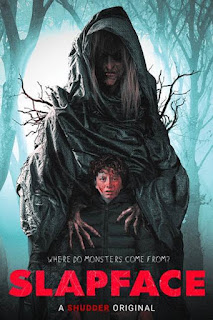 After the death of his mother, Lucas, a loner who lives in a rundown home with his brother Tom, regularly seeks solace in the nearby woods. With his only “friends” being a group of female bullies, he keeps to himself most of the time. But, after a strange encounter with an inhuman monster, Lucas begins to withdraw from others. When the two reach a tentative trust, a bizarre friendship is born, and Lucas is swept up in a series of primal adventures.

Slapface, which won the Best Audience Award for Best Horror/Thriller/Sci-Fi Film at the Cinequest Film Festival in 2021, was written and directed by Jeremiah Kipp (Black Wake; 60 Seconds to Die ‘Monster’; The Sadist; The Pod) based on his short film of the same title. The film stars August Maturo (Girl Meets World, The Nun), Mike Manning (Son of the South, Teen Wolf), Dan Hedaya (The Usual Suspects), Mirabelle Lee (Blood Ties), Lukas Hassel, and Libe Barer (Sneaky Pete), Bianca D’Ambrosio (The Bay, I Am Mortal, Fear of Rain), Chiara D’Ambrosio (The Bay, I Am Mortal).

Written and Directed by: Jeremiah Kipp 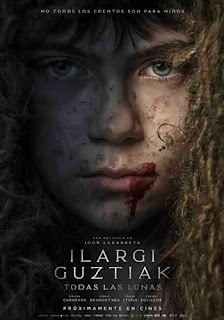 ALL THE MOONS – A Shudder Original

North of Spain, at the end of the 19th century, during the final throes of the last Carlist war, a little girl is rescued from an orphanage by a mysterious woman after it’s destroyed by a bomb. Wounded and close to death, the girl believes the woman is an angel coming to take her to Heaven. Soon, however, she discovers that this strange being has given her the gift of eternal life by turning her into a vampire.

Directed by Basque filmmaker Igor Legarreta (When You No Longer Love Me), All the Moons won several awards at the 25th Edition of The Fantasia International Film Festival, including Best Director, Best Cinematography, and Audience Award. The film stars Haizea Carneros, Josean Bengoetxea, and Itziar Ituño.

Directed and Co-written by: Igor Legarreta 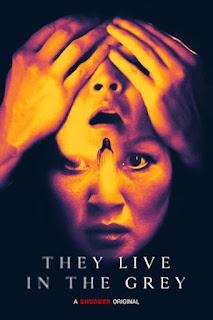 THEY LIVE IN THE GREY – A Shudder Original

While investigating a child abuse case, a young social worker discovers that a supernatural entity is tormenting the family. To save the parents from losing custody of their child, she must confront her fears and use her clairvoyance to stop the malevolent force.

Written and Directed by: Burlee Vang and Abel Vang 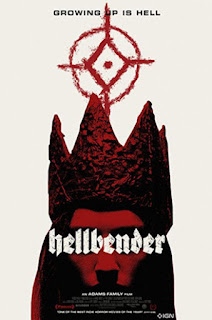 16-year-old Izzy leads an isolated life on a lonely mountaintop. All she’s learned is from her protective mom and the wilderness that swallows them. It’s a gentle, quiet existence — except for when Izzy and Mom bang out loud songs for their band, H6LLB6ND6R. Izzy dreams of a live gig, but her mother thinks she’s too sick and mustn’t be around others. Questioning her illness and starved for companionship, Izzy sneaks down the mountain where she befriends brazen Amber. Izzy is in heaven until a cruel drinking game with a live worm unleashes a new kind of hunger.

Hellbender, which had its world premiere at the 25th Fantasia International Film Festival in August 2021, is the sixth feature film written and directed by the filmmaking Adams family, Toby Poser, John Adams, and their daughter Zelda Adams (The Deeper You Dig, Halfway to Zen, The Shoot).  Poser and Zelda Adams star in the film, along with Zelda’s sister Lulu Adams. Zelda took home the Best Actress award at the Fantasia International Film Festival.

• THE INITIATION
A professor struggling to save his marriage and career uncovers a society of witches.

• BATTLE ROYALE
In the future, the Japanese government captures a class of ninth-grade students and forces them to kill each other under the revolutionary “Battle Royale” act.

• BATTLE ROYALE II
Three years after the failure of the last Battle Royale program, a second act is forged, and a class of students is sent to an island with one objective: to kill international terrorist Shuya Nanahara.

•  ENTWINED
Panos, a city doctor, relocates to a remote Greek village to offer his services to the underserved community. It's love at first sight when he sees Danae, who lives in isolation and with a mysterious skin condition. Determined to cure her, Panos will soon discover Danae is not the helpless princess he thought she was, and time is of the essence for both.

• CITY OF THE LIVING DEAD
A reporter and a psychic race to close the Gates of Hell after the suicide of a clergyman caused them to open, allowing the dead to rise from their graves.

• THE BIRD WITH THE CRYSTAL PLUMAGE
An American expatriate in Rome witnesses an attempted murder that is connected to an ongoing killing spree in the city, and despite himself and his girlfriend being targeted by the killer, he conducts his own investigation.

• THE WRETCHED
A defiant teenage boy, struggling with his parents’ imminent divorce, faces off with a thousand-year-old witch, who is posing as the woman next door.

• 31
Five carnival workers are kidnapped and held hostage in an abandoned and hellish compound and forced to participate in a violent game, the goal of which is to survive twelve hours against a gang of sadistic clowns.

• HAGAZUSSA
In a remote Alpine village in the 15th century lives a marked woman. The scapegoat of ancient superstitions and monstrous misogyny, this self-styled witch begins to assert her otherworldly birthright. This atmospheric debut feature from Lukas Feigelfeld is a haunting pagan death trip and a startling vision of psychedelic horror.

• UNDERGODS
An otherworldly journey through a Europe in decline – a collection of darkly humorous, fantasy tales about ill-fated characters and doomed fortune.

• THE LESSON
Fin, a lone teen from a broken family, gets caught up in the wrong crowd of delinquent kids in this chilling horror film filled with white-knuckle suspense.

• V/H/S 2 (Available on Shudder UKI)
Searching for a missing student, two private investigators break into his house and find a collection of VHS tapes. Viewing the horrific contents of each cassette, they realize there may be dark motives behind the student’s disappearance.

• V/H/S: VIRAL (Available on Shudder UKI)
A Los Angeles police chase sends a fame-obsessed man on a wild ride to save his girlfriend from a cybernetic terror.