THE GIRL WITH THE CUTTER, GOLGOTA and JACK THE ST. RIPPER from TetroVideo available for pre-order on Goredrome

Distributed by TetroVideo, the slasher film JACK THE ST. RIPPER (USA, Italy - 2017) by George Nevada and the extreme films THE GIRL WITH THE CUTTER and GOLGOTA (Spain - 2021) Directed by Mikel Balerdi are coming in a limited DVD pack edition (Slipcase + DVD + Card) in December.

Exceptionally, for a limited time only, these new TetroVideo titles will be available for pre-order starting from December 6th via Goredrome Horror Store (and not on the TetroVideo official website as usual), the new online store with exclusive discounts, tons of horror/extreme films, books and horror gadgets. 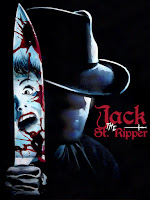 Written by Domiziano Cristopharo (Nightmare Symphony) and directed by George Nevada (Scarecrowd), JACK THE ST. RIPPER is a slasher film about a stripper boy played by Alexio Cohen.

JACK THE ST. RIPPER is a homage to the giallo genre, in particular to the Dario Argento filmography and also to the cult film Carrie (1976) by Brian De Palma.

Synopsis: a dance group of male strippers are brutally murdered one by one by a masked killer wearing black leather gloves.

Best known for his feature debut Larva Mental, Mikel Balerdi is back with the double feature of THE GIRL WITH THE CUTTER and GOLGOTA.

THE GIRL WITH THE CUTTER (51 min.) is an experimental art film and it’s inspired by a true story.

Cofi Valduvieux plays a tormented woman who battles the urge to cut herself. She spends her time fighting voices, having visions of a demonic version of herself and trying to figure out the best way to harm herself. With her mental suffering mounting, things start to escalate.

Golgota (26 min.) is a film about extreme body art with a very pronounced sexual component. The film is told through a series of title cards per hour. It’s 6 hours in the life of Wendy, a woman with multiple paraphilias and who has no limits.