A GOD WITHOUT A UNIVERSE, SATAN CLAUS and FOLIES MEURTIERES available from TetroVideo.

The disturbing drama/horror film A GOD WITHOUT A UNIVERSE (2015) by Kasper Juhl, the Christmas slasher/horror film  SATAN CLAUS (1996) by Massimiliano Cerchi and the french slasher film FOLIES MEURTIERESs directed by Antoine Pellissier in 1984 are now available on DVD via TetroVideo.

A GOD WITHOUT A UNIVERSE comes in a limited and numbered Digipack edition of 100 copies (Slipcase + DVD + Card) with english, french and italian subs.

In particular, the SATAN CLAUS limited edition comes with a Christmas card signed by Massimiliano Cerchi.

Written and directed by Kasper Juhl (Madness of Many, Your Flesh Your Curse), A GOD WITHOUT A UNIVERSE (aka Gudsforladt) is a violent and disturbing drama/horror film about alcohol, drugs, crime and sexual deviations. 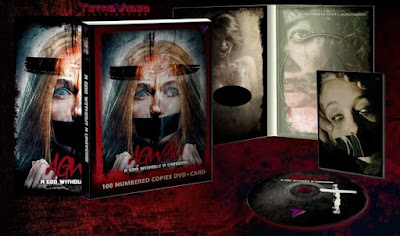 The story centers on Mia and Anders, two siblings who are trying to cope with their brutal past, as their inner beast is leading them on a path to destruction.

SATAN CLAUS is a Christmas-themed horror film written by Simonetta Mostarda and directed by Massimiliano Cerchi (Insane, The House of Evil, Mayday) about a cruel and merciless Santa Claus. 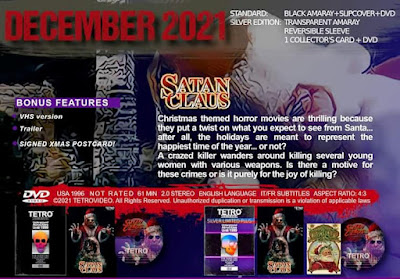 The story, in fact, takes place the night before Christmas, when a serial killer dressed in a Santa Claus suit stalks the streets of New York looking for blood. It seems this madman is building the perfect Christmas tree and adorning it with parts of his victims. It's up to an actor, his police officer girlfriend and a vodoo woman to stop him.

FOLIES MEURTIERES instead is a slasher/gore film written and directed by Antoine Pellissier (Maleficia). Shot on Super 8  in the early 80s in France, this film is 52-minutes of a psycho who kills without mercy. 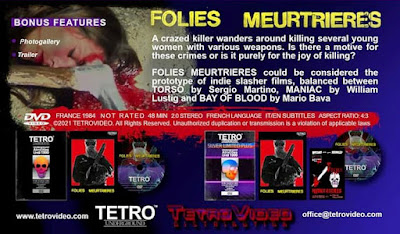 The film is a tribute to Torso (Sergio Martino), Maniac (William Lustig) and A Bay of Blood (Mario Bava).

Synopsis: a crazed killer wanders around killing several young women with various weapons. Is there a motive for these crimes or is it purely for the joy of killing?

To purchase these and other titles visit TetroVideo