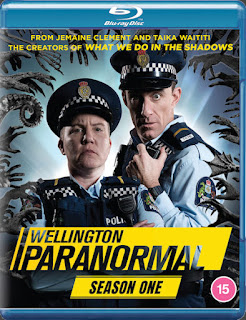 Dazzler Media proudly presents smash hit comedy series Wellington Paranormal, from Jemaine Clement and Taika Waititi, with all seasons coming to Blu-ray, DVD & Download-to-Own, and the first series arriving 5th July. The fourth series has recently been filming and will also be available to own

Wellington Paranormal follows hilariously hapless officers Mark Minogue and Karen O’Leary as they are assigned to the new Paranormal Unit of Wellington’s police force, tasked with tackling the increasing number of local crimes and misdemeanours of a supernatural nature.

From Jemaine Clement and Taika Waititi, the visionary creators behind "What We Do In The Shadows", comes the smash hit New Zealand comedy series which has taken the UK by storm.