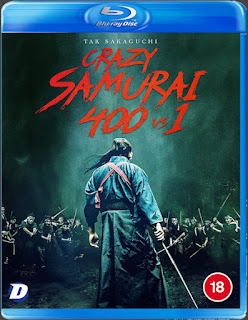 When a master samurai arrives to duel the disgraced Yoshioka dojo, he walks into an ambush, in the world’s first feature length, one-take action film sequence, which comes to Disc and Digital this July from Dazzler Media.

In 1604, Miyamoto Musashi (Tak Sakaguchi -Versus, Re:Born) attacked the Yoshioka family at their dojo and defeated master Seijuro and his younger brother Denshichiro in two duels.

To save their reputation, the Yoshioka family decides to fight back with all 100 family members along with an additional 300 hired samurai. Now Musashi must fight for his life against 400 warriors, earning him a place in history as the “Crazy Samurai Musashi”

From director and famed action coordinator Yûji Shimomura (The Warrior’s Way, Death Trance), CRAZY SAMURAI : 400 vs 1 is a thrilling slice of action cinema and a must-see for genre fans.