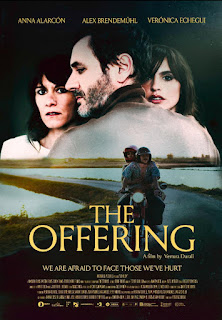 Sovereign film distrribution is proud to announce the UK release of acclaimed Spanish psychological thriller THE OFFERING on 30th July, in cinemas and on Virtual Cinemas and VOD.

Jan, mysterious and marked by a profound sense of guilt, tries to win back the love of his ex Violeta, who is now a psychiatrist, with a family of her own. Jan’s complex and perverse plan to reunite him with Violeta, 20 years after the events that led to their separation, will have severe consequences.

Filled with searing love scenes and unsettling mind-games, it’s a sensual, evocative and multi-layered experience, exploring forgiveness and guilt, and the consequences of a destructive love triangle, recalling the work of provocative Spanish directors Bigas Luna (The Ages of Lulu) and Julio Medem (Sex and Lucia).

Ventura Durall, writer and director of THE OFFERING, set up the production company Nanouk Films in 2000, to promote Catalan cinema. His feature film The Two Lives of Andrés Rabadán was recognized as the Best European Independent Film at the 2009 ECU Festival in Paris, and also received three Gaudi Awards for Best Lead Actor, Best Supporting Actor and Best Actress. His 2014 documentary drama Bugarach won the FIPRESCI Award at the St. Petersburg Message to Man Film Festival