"The Scroll of Morlok" - crowdfunding campaign

Director Dash Finley got in touch to tell us about his horror short "The Scroll of Morlok", starring Rae Gray (Fear the Walking Dead), which is currently in production and are seeking funds to help complete the project. 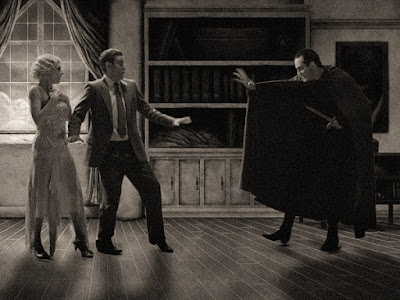 Filmed in the style of a silent horror film, like Nosferatu and The Cabinet of Dr. Caligari, The story follows Kelly, a young film buff running an indie movie theater. She’s found a print of her obsession - a long lost silent horror classic - The Scroll of Morlok. Kelly projects the film, unfurling the story of a waifish HEROINE who, along with her FIANCÉ, stumbles upon a horrific murder at a country estate. A shadow passes through the light of the projector, giving Kelly the sense that she may not be alone.

With creeping dread, she realizes that what she does in the theater is mimicking exactly what’s happening in the old film. When the movie’s Heroine and her Fiancé notice bloody footprints belonging to the mysterious killer; Kelly notices the same footprints in the theater, leading to a billowing curtain. Then, both in the cinematic world and in ours, a ghoulish monster emerges— MORLOK, a wraith-like phantom out of time, his rotted flesh caked over with stage make-up. Terrified, Kelly realizes she has inadvertently freed the fiendish supernatural villain from his celluloid prison!

View some of the finished footage below.

To learn more about the project and to help donate visit the films Seed and Spark page.
Posted by Dark Angel at 10:05