THE IGUANA WITH THE TONGUE OF FIRE - UK BD review 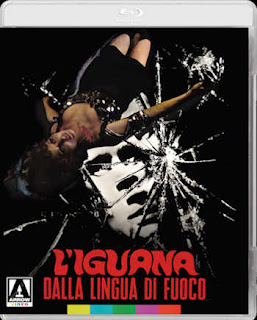 A killer is stalking the friends and family of a prominent Swiss diplomat in Dublin, Ireland in Riccardo Freda's unique Giallo thriller THE IGUANA WITH THE TONGUE OF FIRE, which comes to UK Blu-Ray this month from Arrow films.

Set in Ireland, when the dead body of a young woman is discovered in the boot of a limousine, owned by Swiss diplomat Ambassador Sobiesky (Anton Diffring - Fareinheit 451, The Man Who can Cheat Death), the police are not convinced that he knew nothing about the victim.

As more mutilated bodies turn up, having been attacked by an acid throwing, razor wielding killer, who were all known to the ambassador, or his family and with the Ambassador refusing to cooperate and  hiding behind his diplomatic immunity. The police decide to use some unorthadox methods to investigate him.

Hiring a private detective, Norton (Luigi Pistilli - Your Vice is a Locked Room and I have the Only Key), a former police officer kicked off the force for beating a suspect to death, the police use him to get close to the family and see what he can turn up. But with more bodies piling up, will he be the next victim?

Certainly one of the more unusual Italian Giallo's I've reviewed, taking place in the Republic of Ireland for a change, rather than mainland Europe. THE IGUANA WITH THE TONGUE OF FIRE is never-the-less a good, solid, violent Italian murder-mystery

English and Italian soundtracks - The film gives you the option to watch the film either with the English dubbed track, or its original Italian Soundtrack. If you select the latter, you also get the option of English subtitles and the film will play with it's Italian credits.

Of Chamelians and Iguanas (21mins) - Cultural critic Richard Dyer discusses the film and it's impact on the Giallo genre. Considering Cipriani (25mins) - DJ and Soundtrack collector Lovely Jon gives discusses Stelvio Cipriani's soundtrack to this and some of his other films.

The Cutting Game (20mins) - An interview with assistant editor Bruno Michell discussing how he got into movies and his work on the film.

Red Queen of Hearts (20mins) - Actress Dagmar Lassander is interviewed, discussing her film career and her involvement in this.

Photo galleries - A collection of on-set still, promotional lobby cards, posters and promotional artwork are included which you scroll through using the skip button on your remote.

A nice selection of extras, but most will probably only appeal to die hard Giallo fans being largely comprised of critics giving their two-penneth on what they liked about the film. Though due to the film's age it was probably hard to track down any surviving members of the production. The interview with Dagmar Lassander was nice though and the commentary track with critics Flint and Smith was rather fun to listen to, which were both major plus points and I also liked the option of being able to watch the film in either English or Italian with the respective titles.

To summerise, if you enjoy Italian Giallos, you would well be advised to seek this one out, boasting plenty of violence, blood, female nudity and more red-herrings than you can shake a stick at, that will keep fans of Italian cinema very happy.