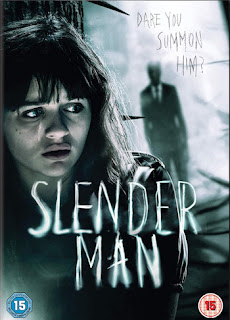 An internet legend comes to life, as the "Slender Man" is released to Digital, DVD and Blu-Ray this month from Sony Pictures.

Small-town best friends Hallie, Chloe, Wren and Katie engage in an occult ritual to conjure up the Slender Man. A tall, thin, horrifying figure, whose face has no discernible features, to try and prove he's just an internet legend.

Two weeks later, Katie mysteriously disappears during a class trip to a historic graveyard. Determined to find her, the girls investigate the legend of the Slender Man online, and quickly suspect that he may be all too real...

Extras on the disc include a Behind the Scenes feature with the cast and crew.

"Slender Man"  is available now on Digital and is released to DVD and BD from Dec 26th from Sony Pictures.