NETFL!X AND KILL, the latest darkly hilarious offering from writer/director Kate Shenton, tells the unlikely story of a psychopath and his victim... who spend all day sitting around watching television. Pitched as 'Gogglebox with a horror twist,' the web series is the first production under the Bubble Wrap Creations mantle, a partnership between Shenton and producer Baptiste Charles.

The series reunites the award-winning director with Adam Rhys-Davies and Nic Lamont, stars of her hugely popular horror feature EGOMANIAC. Each episode features an homage to a different horror villain, from Pinhead to Freddy Krueger, placing the series firmly in the genre, but it's the witty dialogue and unexpectedly touching moments that set the show apart. 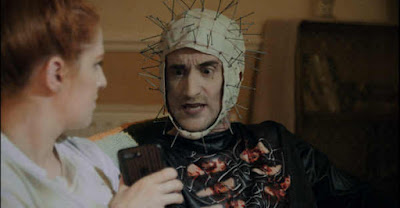 According to Kate, “I’ve been really overwhelmed by the positive response to the release of Netfl!x and Kill. It’s a series that keeps snowballing in popularity, and you can already see a core fan base developing for it. I would like to thank everybody who has watched, shared and supported the series so far!”

The 8-Part series is now available to watch in its entirety on the Hex Studios YouTube channel. With almost 250,000 subscribers, the channel is fast becoming the go-to platform for indie horror, from their viral Owlman prank videos to creepypasta tales, original web-series and even full movies.

Hex Studios head Lawrie Brewster sees an exciting future for the channel as a “growing platform to showcase unique, independent voices in the horror genre, people like Kate who deserve to have their work seen by the widest audience possible.”

The Hex Studios team has big plans for the channel in the coming months, so watch this space, and in the meantime, why not head over there now and binge on their latest delightfully dark indie offering?

View the series on YouTube
Posted by Dark Angel at 20:34