Far From the Apple Tree trailer

Judith (Sorcha Groundell), a wide-eyed and innocent artist, has been given the offer of a life time – the opportunity to live and learn from renowned occult artist, Roberta Roslin (Victoria Liddelle - The Outlaw King).

In exchange for cataloguing and archiving Roberta's visual archive Judith will be trained, moulded and prepared for her first solo art exhibition. To her horror, Judith soon realises that there is more to Roberta's offer than she initially thought as she discovers a mysterious woman hidden within the archive – Roberta's missing daughter who bears a striking resemblance to herself. Judith is faced with a battle between artistic integrity and her own mind.

Directed by Grant McPhee (Post Punk documentary Big Gold Dream, one of 2015's Sight and Sound picks of the year, and psychedelic horror Night Kaleidoscope) and with a soundtrack by underground artist Rose McDowall (Psychic TV, Strawberry Switchblade, Current93) Far From the Apple Tree follows in the tradition of The Wicker Man, Alice in Wonderland, Valerie's Week of Wonders, Jean Rollin and Rebecca with an added large dose of dark psychedelia.

Far From the Apple Tree will hit cinemas, DVD and online platforms in early 2019. 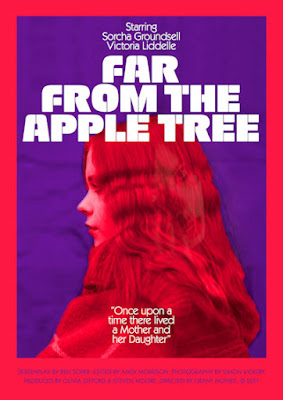