Ribbons tells the story of a dinner party gone awry; first through the antagonistic actions of the host, and latterly through the intervention of a nuclear bomb, which detonates in the city beyond and necessitates the end of dinner and the guests' swift departure downstairs to the host's panic room / fallout shelter.

Our host is revealed to be what's known as a doomsday-prepper -his subterranean bunker is equipped with everything that he and his wife need to survive the nuclear winter. Everything has gone according to his fastidious emergency plans – everything except the number of people now sharing the bunker with him. Perhaps there are ways he can thin the herd? It's for the good of humanity, of course... 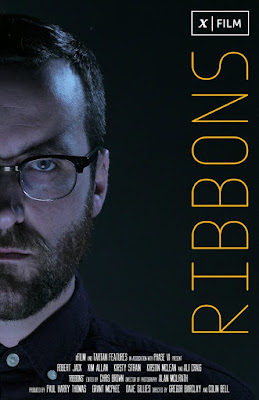