Celebrating 60 years of Hammer Horror, DR JEKYLL AND SISTER HYDE, TO THE DEVIL A DAUGHTER, STRAIGHT ON TILL MORNING and THE HORROR OF FRANKENSTEIN Doubleplay editions released in the UK 29th January 2018 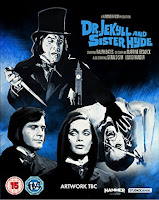 In Victorian London, Professor Jekyll (Ralph Bates), an earnest scientist, obsessively works day and night haunted by the fear that one lifetime will not be enough to complete his research. Side-tracked from his objective he becomes consumed with developing an immortality serum. Once convinced his findings are complete, he consumes the potion only to discover that he is to become two as he turns into half Jekyll and half Hyde.

Desperate to cover up his newfound identity he calls her his sister, but things take a turn for the worse when he realises that he needs female hormones if he is to maintain his existence. Before long he is battling with his alter ego Mrs Hyde (Martine Beswick), as a number of young girls begin to go missing in the streets of London…

TO THE DEVIL A DAUGHTER 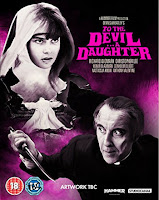 In 1970s London John Verney (Richard Widmark), a renowned occult writer, is approached by Henry Beddows (Denham Elliot) to help rescue his daughter Catherine (Nastassja Kinski) from a Satanic cult. Catherine is a nun with the Children of the Lord, a mysterious heretical order based in Bavaria and founded by the excommunicated Roman Catholic priest (Christopher Lee).

When Catherine arrives from Germany, Verney sneaks her away from her bodyguard and takes her to his apartment. The order, however, are determined to get Catherine back and use all the powers of black magic at their disposal in the ensuing battle between the forces of light and darkness.

Extras: New featurette - Dark Arts: Inside To the Devil a Daughter plus more tbc

STRAIGHT ON TILL MORNING 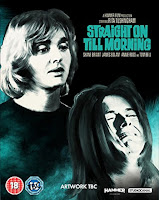 Brenda (Rita Tushingham), an innocent young girl, leaves her hometown of Liverpool for London in search of love.

By chance she meets Clive (Shane Briant). Attractive, debonair and rich he seems to be the handsome Prince Charming she’s been looking for, but Clive is actually a deeply disturbed young man and his psychotic tendencies soon manifest themselves and destroy Brenda’s dreams of a fairy-tale life.

THE HORROR OF FRANKENSTEIN 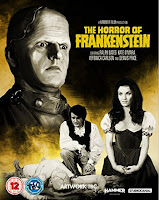 But when the doctor runs out of fresh body parts for his ‘research’ he turns to murder to complete his gruesome new creation. Now his monster has unleashed its own ghastly killing spree and the true horror of Frankenstein has only just begun…

Extras: New featurette - Gallows Humour: Inside The Horror of Frankenstein plus more tbc


In addition, BLOOD FROM THE MUMMY’S TOMB, DEMONS OF THE MIND, FEAR IN THE NIGHT and SCARS OF DRACULA are available now.