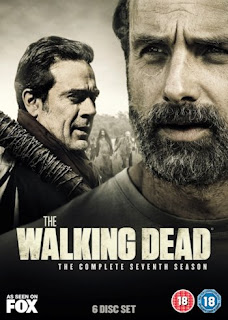 THE WALKING DEAD returns with its most shocking series to date as Negan’s savage rule forces the residents of Alexandria to their emotional and physical limits. On UK DVD and Blu-ray, which includes over two hours of featurettes plus over four hours of audio commentary and deleted scenes.

THE WALKING DEAD’s record breaking series 7 premiere dramatically kicked off as Negan brutally forced Rick and Alexandria to fall under his will after killing two fan favourites in the highest rated episode to date. After the Saviours impose cruel and corrupt rule upon Alexandria, Rick realises that Negan cannot be reasoned with. He and his group have to prepare to go to war with the Saviours and take Negan down once and for all.

Victory will require more than just the supplies and numbers in Alexandria and while in pursuit of more weapons, food and new fighters, Rick and the group will be tested in ways we've never seen before. They'll explore a world that is much bigger than anything they've encountered and discover new factions (The Kingdom, Oceanside and The Scavengers) that will aide and test Alexandria’s fight against the Saviours. The group will rise up and band together with new allies, but are they prepared for an all-out battle with Negan and his army?

THE WALKING DEAD: THE COMPLETE SEVENTH SERIES and THE WALKING DEAD: SERIES 1-7 is available to pre-order now from and arrives on Blu-ray and DVD on 25th September, courtesy of Entertainment One.