Circus of Horrors auditioning for a "Pickled Person" this Friday!

You don't have to be a bottle blond to join the outrageous Circus of Horrors but you will be asked to fit in a bottle.

Auditions for the New Pickled person are taking place in two locations this Friday 21st of July 2017 at...

Wimborne Tivoli Theatre, Dorset at 11am
and
Exmouth Pavilion, Devon at 3pm

Anyone thinking of auditioning will have to fit into a bottle measuring only 2' tall & 18'' in diameter, they must be over 18 years old, not suffer from claustrophobia and be able to squeeze into tight spaces. 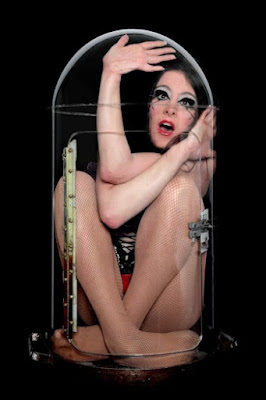 The lucky winner could go on to tour with the infamous cult show on its forthcoming Festival of Fear tour.

Annually the Circus of Horrors plays over 100 UK theatres and this tour has expanded to take in festivals throughout  the world including The Fuji Rock Festival in Japan (twice), the Wacken Festival in Germany, Download (twice) plus shows in Chile,  Uruguay, Holland, Belgium, Argentina, France, Italy, Ireland, Finland, Hong Kong and Moscow where it became the 1st UK Circus ever to perform in Russia. The show also played an astounding 10 nights at London's O2.

Taking the Circus of Horrors to Russia wasn't the first time it has created history, it became the only circus ever to reach the finals of Britain’s Got Talent and the first circus to perform in London's West End for over 100 years.

The Circus Of Horrors’ appearances on various subsequent TV shows have turned what started as a cult show into a household name – taking the extreme to the mainstream.

Its’ TV credits now also boast The X Factor, The Slammer, Daybreak, Fairground Attractions, Who Wants to be a Millionaire, Body Shockers, Fake Reaction, This Morning, Ant & Dec, The One Show & A Royal Command Performance.

Starting its gruesome beginnings in the 1995 Glastonbury Festival The Circus of Horrors  became an instant hit, touring all over the world from Chile to Chatham, Argentina to Aberdeen, Japan to Jersey including festival appearances with Alice Cooper, Eminem, Motley Cure, Oasis, Iron Maiden, The Manic St Preachers, Foo Fighters, Aerosmith, Rob Zombie and many more.