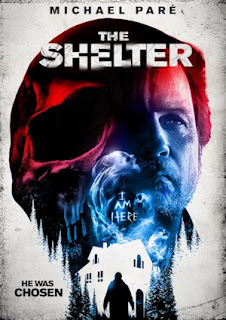 John Fallon’s “The Shelter”, called “remarkably ambitious” by the L.A Times, premieres on US DVD January 3rd from Uncork’d Entertainment.

Michael Paré (Eddie and the Cruisers, Philadelphia Experiment)  “steals each and every scene” in “the smart man’s horror film” (Icons of Fright) written, directed and produced by Fallon.

On a star filled night, widower and homeless man Thomas Jacobs (Michael Paré) finds shelter for the night when he falls upon a vast two-story house with the lights on and an inviting open front door. He strolls on in thinking he just caught a lucky break and for a while, it would appear as though he did. But soon enough, he realizes that the house won’t let him leave, as its doors are all locked while its windows cannot be opened or broken. Destiny has brought Thomas to this place. What does it want from him? Will he survive the ordeal?

Extras on the DVD include an insightful audio commentary with writer/director/producer John Fallon, a video interview with star Michael Pare, a video tour of the house location, storyboards, the teaser, and the film's unnerving trailer.

The Shelter hits US DVD January 3 from Uncork’d Entertainment.


Pre-order the US DVD from Amazon.com