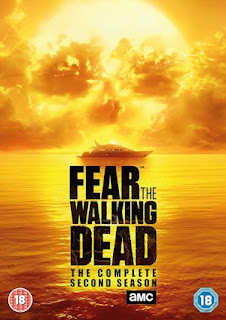 Unless you subscribe to BT Vision, you may have missed Series 2 of the critically acclaimed Fear the Walking Dead, the sister show to the hugely popular The Walking Dead series.

Well the good news is that Series 2 hits UK DVD and BD this month courtesy of Entertainment One, who were very kind to send me a review copy to take a look at.

Picking up from the end of Series 1, Travis (Cliff Curtiss) his partner Madison (Kim Dickins) and their respective children, along with the other survivors, head on out to Victor Strand’s (Colman Dominigo) boat, just as the military bomb the mainland.

However, it seems things may not be any safer at sea, as they encounter zombies in the shallows and floating on the water, as well as ruthless marauders, looking at plundering any boats that come their way, as they head South.

But even if they do reach their intended destination unscathed, it may not be the safe haven they hoped for and they discover you have to make some very brutal decisions if you want to survive in this new world.

Fear the Walking Dead – Series 2 is released in both a BD and DVD box set version, which contain all 12 episodes from Series 2 spread across 4 discs.

Extras wise, disc 4 contains a selection of “making of” features for each episode, showing the filming locations, special effects and interviews with the cast and crew.

Fear The Walking Dead: The Complete Series 2 is available on UK BD and DVD from 5th December, courtesy of Entertainment One.