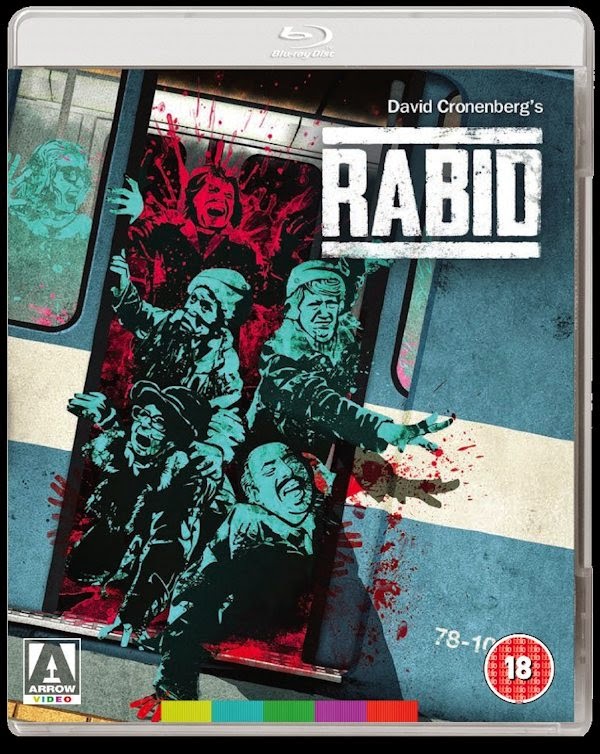 Following on from Arrow videos release of David Cronenbergs “Shivers” comes his follow up feature “Rabid”, which is released in an extras laden Blu-Ray and DVD combo pack this month.
A young couple are involved in a motorcycle accident. The boyfriend is badly bruised, but the girl, Rose (played by porn star Marilyn Chambers in what was to be her only mainstream role), suffers terrible burns. Fortunately, they crashed close to a plastic surgery clinic, which being the only facility nearby, takes it upon themselves to treat their injuries.
However, one of the reasons the doctors are so keen to treat them themselves, rather than transport them to a city hospital, is they wish to test out a new skin reconstructive procedure they’ve developed.
But despite the operation appearing to be successful, their new skin regenerative process takes on some chilling side effects, as she develops these strange stinger like appendages, which come out from under her arms and attack and suck the blood from people (you can tell this is a Cronenberg film).
Anyway, she promptly breaks out of the hospital and goes around randomly attacking people, who go on to develop rabies like symptoms and start attacking others. Pretty soon, there’s chaos on the streets of Montreal, as the epidemic spreads and the police and national guard hit the streets with orders to shoot to kill anyone displaying symptoms. Whilst the boyfriend and one of the doctors from the hospital, Dr Cypher (Joe Silver), try to track down Rose and figure out what has gone wrong with her.
Produced by Ivan Reitman, who most people will probably know as being the director of “Ghostbusters”, this 1977 film, made just 2 years after “Shivers”, is basically a twist on the zombie film formula. However, due to the films low budget, tends to concentrate more on the main characters, rather than the chaos going on in the city.
That being said, it does boast some interesting scenes of the infected randomly attacking others and showing the authorities “clearing” the streets of them. The scenes of soldiers in hazmat suits dumping bodies in specially adapted refuse lorries, is particularly grim.

This release by Arrow comes chock-full of extras, including 2x feature length audio commentary tracks. The first by director David Cronenberg and the second with Biographer William Beard.
Next are a series of interviews featuring Director David Cronenberg, Producer Ivan Reitman, Special Effects man Joe Blasco and Co-producer Don Carmody discussing their involvement with the film and their time on the set.
Then there’s a couple of documentaries, the first is actually a biography taken from the 1999 US TV series “The Directors” (60mins), which looks at the Cronenberg’s career up till that point, and features interviews with the man himself, and the many actors he’s worked with such as Michael Ironside, Peter Weller, Willem Defoe and others. The other is a brand new documentary exclusive to this release entitled  “Raw Rough and Rabid”, (14mins) which looks at the history of distributors Cinepix, who helped produce Cronenbergs earlier movies and looks at some of their other infamous releases, such as the “Ilsa” films and “My Bloody Valentine”.
Also included is the films original theatrical trailer and a promotional gallery, featuring poster art, lobby stills and trade adverts used to promote the film.
This is the first time the film has been released to Blu-ray anywhere in the world, and contains the most extensive collection of extra features. So if you’re looking to upgrade, or you wanting to check this film out, then this Arrow release is a must.
The film is released in both a BD/DVD combo pack (both discs containing the same features on) and in a limited edition Blu-ray steelbook from February 16th.
Buy the UK BD/DVD combo pack from Amazon.co.uk
Buy the UK BD Steelbook from Amazon.co.uk