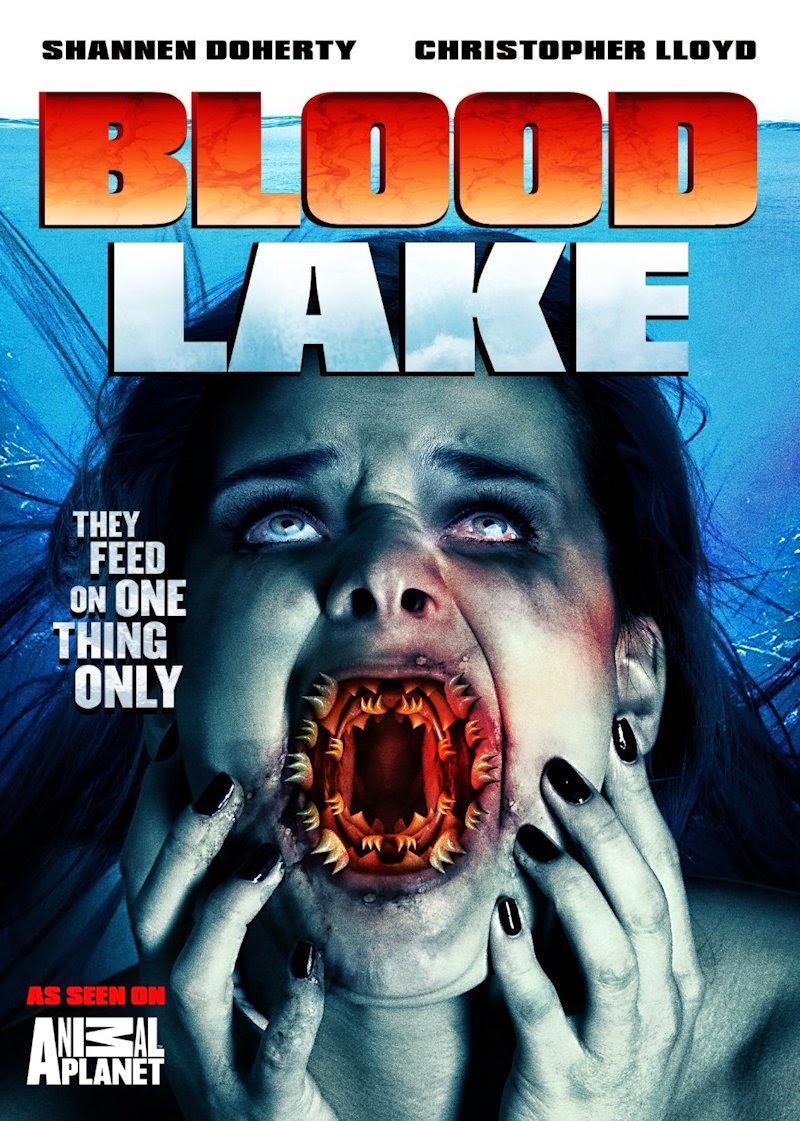 Just when you thought (for the 100th time) that it was FINALLY safe to go back in the water, along comes “Blood Lake”. The latest film from prolific indie director James Cullen Bressack (Hate Crime, 13/13/13), which is out on DVD in the US this month.
The film stars US TV Actor and former “Baywatch” star Jason Brooks (TVs “Revolution” and “The Mentalist”) as Michael Parker. A ‘Chief Brody’ type character, who works for the Department of Fish and Wildlife, who’s sent to investigate an outbreak of carnivorous eels, known as Lampreys, in one of the local lakes.
The Lampreys have been decimating the fish population and the towns Mayor (played by Christopher Lloyd – “Piranha 3D”, “Back to the Future”) wants something done about them quickly, before the tourist season starts. But before they can sort out how to cull them all, they manage to infest the local rivers and everything both up and down stream. As the people at the local beach find out, much to our amusement, when they emerge from the waters covered in fish guts.
But it seems things are about to go from bad to worse, as the Lampreys have developed a taste for human blood, and proceed to arbitrarily start snacking on anyone venturing near a water course, before managing to get into the towns water supply. Spelling bad news for people wanting to use their swimming pools, garden sprinklers or just sit on the toilet reading their favourite newspaper.
Originally filmed for the US TV networks, the film cheerfully apes the basic plot to stuff like “Jaws”, “Piranha”, “Alligator”, “Squirm" and various other films about nature on the rampage. So it comes as no surprise to learn that this is one of those hilariously bad B-movies to come out of the Asylum pictures stable. The people who gave us such wonderful titles as “Megashark Vs Giant Octopus” and the “Sharknado” films (so you know what you’re in for).
Dodgy CGI, unfeasible plot devices and over the top gore are the order of the day here, which had me laughing out load for most of the films duration, which also features Shannen Docherty ("Beverly Hills 90210") as Mike’s wife and co-stars Zack Ward ("Resident Evil : Apocalypse", "Don’t Blink") as Mike’s work partner Will.
Having reviewed some of the directors earlier works, I had often wondered what he could do with a half-decent budget and now I know. Needless to say, I thought this was hilarious stuff. If you’re a fan of Asylum pictures other movies, you should definitely get a kick out of this one. It’s a film that the sci-fi channel might describe as “Terribly good” (with the emphasis firmly on the “terribly”). So if you love these cheesy B-movies, definitely give this one a go!

The film is released to DVD in the US Nov 28. The screener I viewed did not contain any special features on, whether the released disc will have any trailers or any extras features on is unknown at this time.

Buy the US DVD from Amazon.com