Bobcat Goldthwaite is up "Willow Creek" (and without a paddle)! 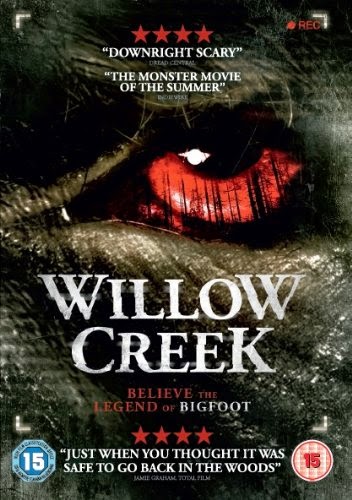 Kaleidoscope Entertainment is pleased to announce the UK release of the nerve-wracking horror WILLOW CREEK which will be released in cinemas this May.

Directed by celebrated film-maker Bobcat Goldthwait (God Bless America, World’s Greatest Dad, Sleeping Dogs) [he also played Mr Zed in those "Police Academy" films] . Jim (Bryce Johnson - Pretty Little Liars) and his girlfriend Kelly (Alexie Gilmore – Definitely, Maybe) are visiting the infamous Willow Creek, the alleged home of the original Bigfoot legend – the tale of huge ape like creatures that roam the forests of North America. It was there that in 1967, the legendary beast was captured on film and has terrified and mystified generations since.


Keen to explore more than 50 years of truth, folklore, misidentifications and hoaxes, Kelly goes along for the ride to keep Jim happy, whilst Jim is determined to prove the story is real by capturing the beast on camera.


But, deep in the dark and silent woods, isolated and hours from human contact, neither Kelly nor Jim are prepared for what is hidden between the trees, and what happens when the cameras start rolling…

WILLOW CREEK was well received at several festivals last year including Fantasia, Sitges and Frightfest, where it was named as the winner of Total Film’s Best Scare. The film is released to UK cinemas May 2nd and on DVD from May 26th.
You can pre-order the DVD at Amazon.co.uk