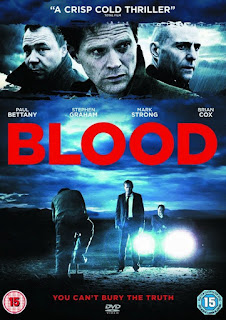 Paul Bettany and Stephen Graham star as two brothers who's lives spiral viciously out of control in BLOOD, which is released to UK DVD and BD 10th June.
Directed by Nick Murphy (The Awakening), Blood is a psychological thriller about two brothers whose lives begin to collapse under the weight of their father's illustrious shadow.
A contemporary Greek Tragedy set around the investigation into the murder of a young girl, BLOOD stars Paul Bettany (The Da Vinci Code, Legion), Stephen Graham (Tinker Tailor Soldier Spy, Boardwalk Empire, This is England), Brian Cox (Rise of The Planet of The Apes, Red, The Bourne Supremacy), and Mark Strong (Zero Dark Thirty, Kick Ass, Tinker Tailor Soldier Spy).
Joe (Bettany) and Chrissie (Graham) are both respected police detectives under pressure to live up to the reputation of their father, Lenny (Cox) who ran the department for years and was a key figure in the local community.
Once a bully to both his colleagues and sons, Lenny is now in the midst of the onset of dementia and is drifting away from his sons. However, Joe and Chrissie's desire to fill his shoes has some terrible consequences, and soon they find themselves investigating their own crime..
The fear of being caught by their close friend and colleague Robert (Strong) is nothing compared to the fractures this causes in the brothers' relationships and in their own minds. Chrissie is consumed by his own conscience while Joe becomes delusional and terrified of what this might do to his beloved family; a family that his father raised him to protect at all costs....
Don't miss you chance to see BLOOD when it is released to DVD & Blu-ray on 10th June.