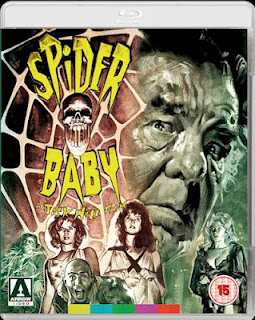 Jack Hill’s cult classic makes it’s worldwide Blu-Ray debut right here in the courtesy of Arrow films this month, in an extras laden special edition BD/ combo pack.
Starring horror veteran Lon Chaney Jr, he plays Bruno, the house servant/chauffer/caretaker of a decrepit mansion. Who has also been left to care for the 3 mature children of his former master, who died a few years ago. However, the children all suffer from a rare condition that forces them to regress mentally when they reach a certain age.
The problem is they also display psychotic tendencies, as the poor postman finds out when he comes to make a special delivery. To make matters worse, it turns out some distant relatives are going to be visiting the property later that day to see about the sale of the estate and to take the children into their care.
Needless to say, when the relatives and their legal team arrive, the evening does not go to plan after Bruno fails to convince them to take lodgings elsewhere. And as they attempt to bed down for the night, the children’s games begin…
Filmed in Black and White back in 1964, at a time when Colour films were becoming the norm, this is a bit of a strange one. It’s not particularly bloody, but does feature some disturbing scenes, particularly where Bruno is unsure what to serve the guests for dinner, so one of the children goes out and captures a cat for him.

There's also some bizzare offbeat humour, as the film opens up with a strange, comical song, sung by Lon Chaney himself, giving it the feel of an "Abbot and Costello" movie. Then there's the jokey, jovial nature of the first victim, which is offset against the disturbing behaviour of the children and the rather nasty way they dispatch their victims as they play their "games", which makes you wonder in what sort of context to view the film.

Spider Baby is also notable for being one of director Jack Hill's first works, who went on to direct such exploitation classics as "Coffy" and "Foxy Brown" as well as it being one of Lon Chaney Jr’s last films. The film's also notable for being one of the first films of genre stalwart Sid Haig (Devil’s Rejects, Galaxy of Terror) who was in his 20s at the time. Other interesting casting choices include, Carol Ohmart (House on Haunted Hill), and Mantan Moreland (who starred in those Charlie Chan films of the 1940s).
The film did not receive an official release after completion, as the production company went bankrupt shortly after. However it did garner something of a cult following on home video, after the director managed to aquire a master tape (by exceptionally dubious means), during the 1980s. Whilst there have been some previous DVD releases kicking about, this new  release by Arrow marks the first time the film has been available on Blu-Ray anywhere in the world, which has been struck from a brand new hi-definition master taken direct from the original negatives.
The film is released in a BD/ combo pack, which come chocked with extras including…
- Audio commentary featuring Jack Hill and star Sid Haig.
- Panel discussion from The “-TO-” Festival, featuring Jack Hill and stars Quinn K. Redeker and Beverly Washburn.
- “The Hatching of Spider Baby” – Interviews with Jack Hill, Sid Haig, star Mary Mitchel, fan Joe Dante and more on the making of the film.
- “The Cinema Sounds of Ronald Stein” – A look at the works of the films soundtrack composer Ron Stein
- “The Merrye House Revisited” – Jack Hill revisits the original house that was used as the main location in the film.
- Alternate opening title sequence.
- Extended scene.
- Original Trailer.
- Gallery of behind-the-scenes images.
- The Host (1960) – Jack Hill’s early short film starring Sid Haig in his first role.

The case also contains a special collector’s booklet and the sleeve comes with reversible artwork.


Definitely one for cult movie enthusiasts, Spider Baby certainly lives up to it's alternate title "The Maddest Story Ever Told".
The film is released to UK disc Monday 17th June.

Buy the BD/DVD combo pack at Amazon.co.uk
Posted by Dark Angel at 18:39