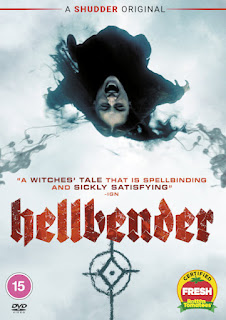 FRESH, RAW and bewitching indie folk horror HELLBENDER will grip fans with a story that has real bite, promising one hell of a ride. As unnerving and gruesome as it is beautiful and enticing, this captivating, unsettling and hellish feature will push audiences to the brink.

Written and directed by genre trailblazers, the Adams Family (The Deeper you Dig), the film is certified fresh with a 97% score on Rotten Tomatoes.

16-year-old Izzy (Zelda Adams) lives in isolation with her mother (Zelda’s real-life mum, Toby Poser) in the quietly eerie mountains of New York State. Cut off from the outside world, Izzy is home-schooled and prohibited from leaving the house because she suffers with a rare auto-immune disease which prohibits her from being around other people. Or so she’s been told...

After befriending Amber (sister Lulu Adams), Izzy questions the reality of her disease. And, when she eats a live worm as part of a teenage game, she develops an insatiable hunger for living things...

The first taste of blood awakens Izzy’s powers, and she soon learns that she and her mother are the latest in a line of HELLBENDER, a hybrid of witches, demons, and predatory animals. While Izzy’s mother is convinced that she has her powers under control, when Izzy learns of her new abilities, a dark and dangerous mother-daughter power struggle collides with a battle of bloodlust.

What ensues is an inventive and exhilarating occult coming-of-age story imbued with a uniquely female narrative. With breath-taking cinematography and astounding performances, the film is a product of the Adams Family's home-grown aesthetic and ushers something spellbinding, shocking, and refreshingly unexpected into the horror genre.

Dark, disturbing, and full of depth, HELLBENDER is a must-watch for all genre fans and is set to arrive on DVD and Digital on 5 September 2022 courtesy of Acorn Media International.