CONFESSIONS OF A NECROPHILE GIRL: The disturbing drama about Karen Greenlee comes to Blu-ray via TetroVideo 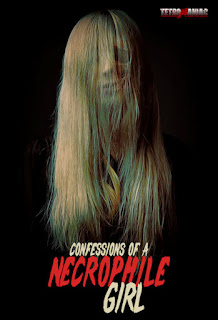 TetroVideo invites you to discover Karen Greenlee’s story with CONFESSIONS OF A NECROPHILE GIRL, the highly anticipated italian film about necrophilia.

Synopsis: Inspired by the true story of the American necrophile Karen Greenlee, played by Angela del Regno. Karen relives the most important moments of her life through a video diary: from childhood to first love, to the scandal about her sexual attraction for corpses.

In the 1970s, the 20 years old Karen Greenlee worked as an apprentice embalmer at a funeral home in California. In 1979 she stole the hearse to have sex with the corpse of a 33 years old man. The woman was found days later with a long written confession where she admitted her strong sexual attraction to the corpses, and having had sex with 20 to 40 other bodies of young men.

In 1987, after a detailed interview, she changed her identity and moved to another city.

The release date for CONFESSIONS OF A NECROPHILE GIRL Blu-ray has not been announced yet.