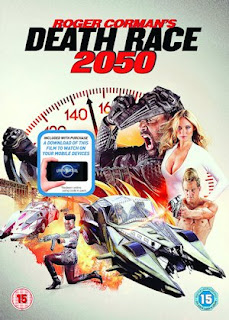 “Death Race 2050”, Roger Corman’s campy follow up to his campy original “Death Race 2000”, hits UK disc this month from Universal pictures, who were kind enough to send me a DVD to take a look at.

Set in the year 2050 (obviously) in what is now called the United Corporations of America, where overpopulation and unemployment have sky-rocketed. Fans are gathering for the annual Death Race, a coast to coast race where drivers in specially modified cars get extra points for running down pedestrians.

The reigning champion Frankenstein (played by The Hobbit’s Manu Bennet) is looking at holding onto his crown, and as the race gets underway a trail of carnage and destruction quickly ensues as the various racers compete for poll position, taking out as many bystanders as they can.

Some of the more interesting scenes include Frankenstein driving his car through a day centre full of disabled kids, one of the Black racers, Minerva (Folake Olowofoyeku - TVs Westworld, Female Fight Club), encountering racist rednecks in the deep south and a group of resistance fighters, lead by Yancy Butler (Kick Ass, Lake Placid 3,4 & 5) trying to take out Frankenstein, in an outrageous end battle scene with armoured cars.

Directed by G.J. Echternkamp (Hard Candy) and co-starring Malcolm McDowell as the President, or Chairman as the position is now called. “Death Race 2050” most definitely has its tongue firmly in its cheek. Ignoring the 2008 remake and its sequels, instead billing itself as a follow up to the original 1975 film, and as such, proves to be part sequel, part remake and part homage. Complete with retro-1970s vision of what the future should look like.

Indeed it was kind of like watching a live action version of The Wacky Races, but with a lot of deliberately campy acting, dark humour and political satire thrown in (and some deliberately dodgy CGI to boot). 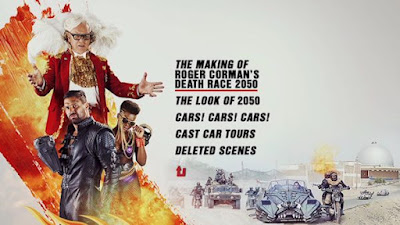 The disc comes with the following special features…

Making of Death Race 2050 (9:50) – a look at the making of the film, featuring interviews with G.J. Echternkamp, Roger Corman, Manu Bennet Malcolm MacDowell and other cast and crew members.

The Look of 2050 (6:15) – More behind the scenes footage and interviews with the cast and crew, showing where they filmed it in South America and how they designed the costumes.

Cars Cars Cars (4:20) – The director and cast discuss the look of the cars and how the built them.

Cast Car Tours (8:15) – A close up of each individuals racing car used in the film.

A nice selection of extras, though it would have been nicer if they’d included the films theatrical trailers, which are sadly absent. The disc I was sent to review was the DVD, however the BD contains the same features on.

If you enjoyed the original, you will undoubtedly want to check this out. Just view it for what it is, a campy, fun popcorn film and you’ll get on fine with it.