"From Dusk till Dawn" the TV series comes to UK DVD 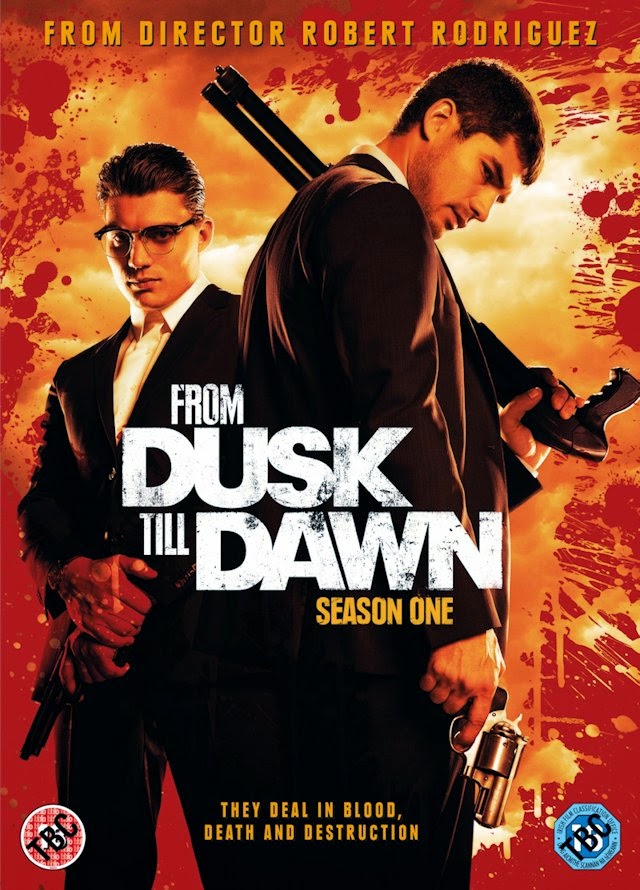 Cult-classic "From Dusk Till Dawn" comes to the small screen with bigger action, more gore and an expanded look at the film's characters as they embark on a frightening journey into the depths of the Titty Twister.
"From Dusk Till Dawn"  - Series One is centered around bank robber, Seth Gecko (DJ Cotrona "Gi Joe - Retaliation") and his violent, unpredictable brother, Richard “Richie” Gecko (Zane Holtz - "Vampires Suck"), who are wanted by the FBI and Texas Rangers Earl McGraw (Don Johnson - TVs "Miami Vice") with his deputy Freddie Gonzalez (Jesse Garcia - "Avengers Assemble") after a bank heist leaves several people dead.
While on the run to Mexico, Seth and Richie encounter former pastor Jacob Fuller (Robert Patrick - "Terminator 2") and his family, whom they take hostage. Using the family RV to cross the border, chaos ensues when the group detours to a strip club that is populated by vampires. They are forced to fight until dawn in order to get out alive.
The series deepens the tone and expands the storyline of the film, adds new characters and backstories, and explores the Mesoamerican mythology behind the creatures inside the club.
With more excitement, and a compelling back story, the show takes us up close and personal with the vicious vampires from the 1996 film and ramps up the gore and tension whilst keeping the darkly comical tone set by the Rodriguez/ Tarantino original.
Already renewed for a second season, "From Dusk Till Dawn" Series One is a must for fans who like their TV shows dark and twisted.
Special Features on the discs include:

"From Dusk till Dawn" - Series 1 is released to UK DVD Sept 22nd from Entertainment One.