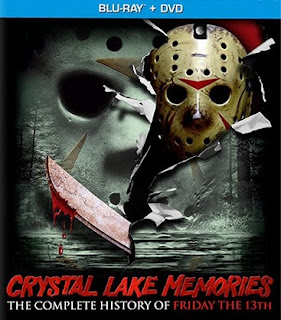 1428 Films, Panic Productions and Hutson Ranch Media have announced that the release date for "Crystal Lake Memories: The Complete History of Friday the 13th" has been moved to Friday, September 13th, 2013. The documentary was originally slated for release on August 27th.
"Because of the scope of the show and in order to craft the best, most interesting and entertaining look at the films and TV series, it became necessary to give the post-production process a bit more time,” says producer Thommy Hutson. “Ultimately, though, we are thrilled with the show and can't wait for fans to get back to camp - and we think Mrs. Voorhees and Jason would be happy with the new date!"
"Having spent well over a year in production on Crystal Lake Memories, we wanted to take a little more time to give fans the definitive Friday the 13th documentary they've been waiting for," explains writer/director Daniel Farrands. "Not only were we able to line up a couple of last-minute interviews for our bonus disc and record a full filmmaker commentary track, it just made more sense to wait a couple of weeks and release Crystal Lake Memories on the ‘unlucky day’ it celebrates: Friday the 13th."
The three-disc Blu-ray/DVD combo pack of the documentary, which runs a staggering 400 minutes, can currently be pre-ordered exclusively via the film’s official website. An exclusive bonus disc containing approximately 4 hours of extended interview material will be included with orders placed on the website. After the soft release on September 13th, the film will be available to the general public on October 8th.
Corey Feldman (star of Friday the 13th: The Final Chapter) narrates Crystal Lake Memories, which features interviews with approximately 150 cast and crew members from all twelve Friday the 13th films and the syndicated television series, many of whom have never before appeared in on-camera interviews. Interview subjects include Kane Hodder, Robert Englund, Tom Savini, Danielle Panabaker, Sean S. Cunningham, Derek Mears, Betsy Palmer, Wes Craven, Robert Shaye, Alice Cooper and many more.
Crystal Lake Memories promises to be the definitive retrospective on the unstoppable Friday the 13th franchise. The film is written and directed by Farrands and produced by Hutson, who previously teamed up for the award-winning Never Sleep Again: The Elm Street Legacy.
Pre-order Crystal Lake Memories: The Complete History of Friday the 13th now at www.CrystalLakeMemories.net