You're Next - In UK cinemas this August 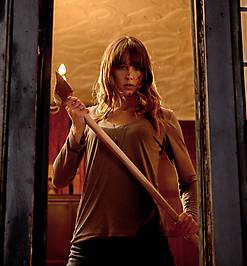 "You’re Next" – a chilling warning scrawled in blood on a neighbour’s wall, starts an evening of bloody mayhem for the Davison family.
A lively reunion is abruptly brought to an end when a gang of mysterious killers, disguised in animal masks, wage an all-out assault on the Davison’s secluded home. Using a series of sophisticated traps, axes, crossbows and machetes, the family are slaughtered one by one until nowhere is safe.
But neither the attackers, nor their victims, have counted on Erin (Sharni Vinson, STEP UP 3D); an innocent girlfriend who has the killer instinct to fight back…
Director Adam Wingard and writer Simon Barrett (A Horrible Way to Die, V/H/S, V/H/S/2) are the talents behind what is already an acclaimed new horror. "You’re Next" stormed audiences at both Toronto Film Festival and SXSW
Lionsgate UK will release You’re Next in cinemas across the UK from August 23, 2013 LIONSGATE UK.
Checkout the trailer on YouTube.