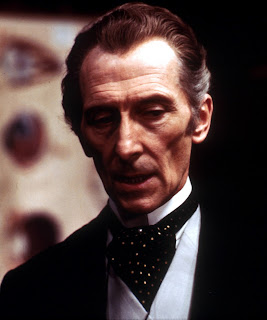 On Sunday May 26th Horror Channel celebrates 100 years of the birth of one of the country’s most beloved actors - Peter Cushing (OBE).
PETER CUSHING CENTENARY DAY will be devoted to some of the legendary actor’s finest work, picked from a film & TV career which spanned 50 years and over 80 films.
Born on 26 May 1913, Cushing’s career took off in the 50s and he is probably best known for his roles for Hammer Films – in particular the sinister scientist Baron Frankenstein and the vampire hunter Dr. Van Helsing.

But to younger generations he is also fondly remembered for his portrayal of Grand Moff Tarkin in Star Wars and for his many appearances as Sherlock Holmes.

The line-up:
10:00.  FRANKENSTEIN CREATED WOMAN (1967)
Hammer Horror’s Frankenstein Created Woman sees Cushing in one of his most famous roles, that of Baron Frankenstein. Here the sinister scientist embarks upon his most ambitious work - bringing a young maiden back to life using the twisted soul of an executed man. Directed by Terence Fisher, this is the fourth film in Hammer's Frankenstein series and seen as the most ambitious dealing, not with the physical aspects of the Baron's work, but with questions of the soul, and its relationship to the body.
12:00  THE BLOOD BEAST TERROR (1968)
Relishing his role as a Victorian super-sleuth, Peter Cushing stars as Inspector Quennell, a Scotland Yard detective sent to a small town in the English countryside to investigate a series of suspicious deaths. Clues led him to renowned entomology professor Dr. Carl Mallinger (Robert Flemying). Through his beautiful daughter Clare, Mallinger has created a ‘were-moth’, a she-creature capable of transforming into a murderous Death Head moth.

13:30  I, MONSTER (1971)
In this loose adaption of the Dr. Jekyll, Mr Hyde story, Cushing teams up with horror-thesp regular Christopher Lee. Lee plays Charles Marlowe, a psychologist who invents a drug which will release his patients' inhibitions. But when Marlowe tests it on himself he becomes the cruel, murderous Edward Blake. It’s up to Marlowe's lawyer, Utterson (Cushing), to discover the truth. The film was intended to be in 3-D, but that was aborted mid-production.
15:00 THE BEAST MUST DIE (1974)
In this ‘beastly’ whodunit, Cushing shines as archaeologist and lycanthropy enthusiast Dr. Lundgre – one of a number of invited guests of wealthy sportsman (Calvin Lockhart) to a big-game hunt. He's sure that one of them is a werewolf and he intends to stalk and kill it. Near the conclusion, the audience have a 30-second interlude during which they can decide, who the hunted beast is. Due to the small production budget, the "werewolf" was played by a German shepherd dog
16:50  HAMMER HOUSE OF HORROR: ‘The Silent Scream’ (1980)
Cushing gives a finely-tuned performance of benign menace as Martin Blueck, a seemingly kindly pet shopkeeper who befriends a released convict, Chuck Spillers, (Brian Cox) As the trust between them grows, Blueck asks Spillers to look after the shop whilst he goes away. But Spillers and his wife find that they are trapped by the deviant mind of an ex-Nazi doctor and Blueck’s experiments live on. Directed by Alan Gibson, this episode from the first series was considered the best.