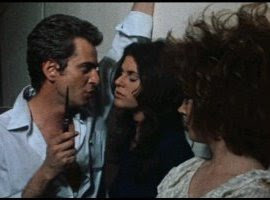 It is being reported on various web sites that exploitation film actor, turned 'adult' movie director, Fred J Lincoln (left) has passed away, following a short illness, at the age of 75.
Lincoln is probably best know to horror fans for playing Fred "Weasel" Podowski in the 1972 cult movie "Last House on the Left" alongside David Hess.
He went on to carve a career for himself as a director in the "adult" film industry, notching up in excess of 300 titles.
Lincoln never had much love for "Last House on the Left", as those who have listened to the US DVD commentary will attest, but did begrudgingly accept its popularity and would often appear at conventions alongside its main star David Hess, who played Krug Stillo (Hess himself passed away in 2011).
News first started circulating on Thursday when several acquaintences started posting messages of condolence on Twitter. His daughter Angelica later confirmed of his passing, saying that he had been unwell for some time.
RIP Fred!