From Beyond Directors Cut comes to UK disc 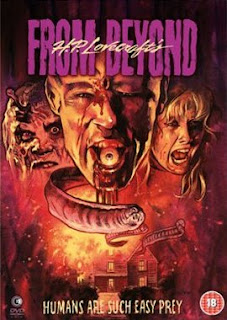 From the team that brought you the gloriously perverse Re-Animator comes the equally surreal horror classic From Beyond, which makes its long-awaited debut on Blu-ray thanks to Second Sight Films.

An obsessive scientist Dr. Pretorius (Ted Sorel) and his assistant (Jeffrey Combs) have invented ‘The Resonator’, a device designed to stimulate the brain’s pineal gland and expand the powers of the mind. The machine gives them more than they bargained for however when a parallel universe inhabited by slimy creatures ready to prey on humans reveals itself.

Pretorious meets a sticky end, only to return as a grotesque, deformed being and all manner of depravity ensues.

Based on another H.P. Lovecraft adaptation this deranged gorefest is directed by Stuart Gordon (Castle Freak) and produced by horror supremo Brian Yuzna (Society). It comes to Blu-ray in stunning limited edition packaging, along with a DVD release on 25 February.

Bonus features include:
• Stuart Gordon on From Beyond
• Gothic Adaptation – An interview with writer Dennis Paoli
• The Doctor Is In – An interview with Barbara Crampton
• Monsters & Slime – The FX of From Beyond
• Director’s Perspective
• The Editing Room – Lost and Found
• Interview with the Composer
• Commentary with Stuart Gordon, Brian Yuzna and Jeffrey Combs
• Photo Montage
• Storyboard to film comparison
• Includes English subtitles for hard of hearing


Buy the UK BD at Amazon.co.uk.