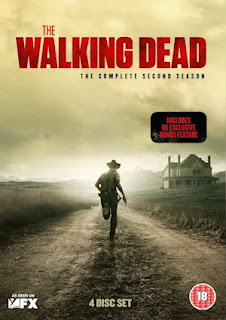 The second installment of the post-apocalyptic, smash hit TV series "The Walking Dead" is being released on UK DVD and Blu-Ray this August.

Experience the nerve-racking thrills of a season whose finale was watched by a record-breaking 9 million US viewers as Rick Grimes and his family and friends fight to survive in a world fraught with dangers where they must overcome their differences in order to stay alive.

Armed with all-new special featurettes as well as deleted scenes, the new release promises to take viewers even deeper into the desperate world of "The Walking Dead" with a series of exclusive extras, including insights from the cast. Viewers can also hear directly from Executive Producer Glen Mazzara in the special optional deleted scenes commentary, learn more about the special effects and wardrobe and enjoy UK exclusive bonus character profiles.

Featurettes : All The Guts Inside, Live Or Let Die, The Meat Of The Music, Fire On Set, The Ink Is Alive, The Sound Of The Effects, In The Dead Water, You Could Make A Killing, She Will Fight, The Cast On Season 2, Wardrobe of The Walking Dead.

Deleted Scenes (from the following episodes with optional Audio Commentary with Executive Producer Glen Mazzara) : "What Lies Ahead", "Save The Last One" "Secrets", "Pretty Much Dead Already", "Nebraska", "Judge, Jury, Executioner"  "Better Angels", "Beside The Dying Fire".

Buy the UK Blu-Ray from Amazon.co.uk