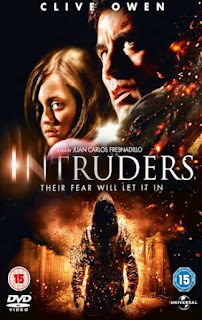 The lives of two families living in different countries are disrupted by a menacing faceless intruder who wants to take possession of their children. Although no one can see him, Hollow Face lurks in corners desperately desiring love but only knowing how to spread fear and hate.

In Spain, a mother (Pilar Lopez de Ayala) tries to protect her son Juan (Izan Corchero) from an invasion in her family and home, whilst in Britain a terrifying being creeps into John Farrow’s (Clive Owen - Shoot Em Up) life after his beloved 13-year-old daughter Mia (Ella Purnell) has petrifying dreams of a demon that becomes a real danger. As the presence becomes more powerful, the anxiety and tension increase when the parents also witness the apparitions and it seems that despite all desperate attempts, no security measure can keep Hollow Face out.

Intruders creeps onto UK DVD and Blu-ray on May 21, as well as being available for Digital download.

Buy the Blu-ray at Amazon.co.uk