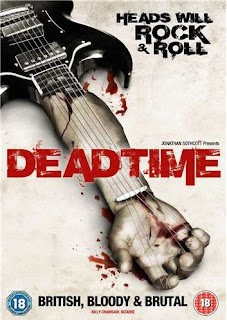 Who said rock and roll was about sex and drugs, not in DEADTIME. Everyone craves success and most will do whatever it takes, but DEADTIME will take you down a chilling and twisted plot of blood, lies and betrayal that will have you jumping out of your seats.
Love Meets Murder - the once popular rock'n'metal band, are down on their luck and their careers. Hoping to create their "magnum opus", they lock themselves into a Wednesbury recording studio for the weekend and nobody is able to leave, but before the band finish tearing into their new hit, a series of mysterious murders begin to plague them all.
Now only their own self-belief can save them from the psychotic mind of their assailant. Leslie Grantham (Eastenders) & Terry Christian (that guy who used to present "The Word") both have cameo appearances in this bloodthirsty gripping British Horror. Even before it’s released the DEADTIME extended trailer has notched up over half a million youtube views, showing everyone loves a good story, great british actors and A LOT of blood!

DVD Extras include
· 2x Theatrical Trailers
· An Introduction to the Post Office Studio
· No Sleep 'til Wendsbury - The Filming of DEADTIME
View the trailer on YouTube.

Buy the DVD on Amazon.co.uk.