Strippers Vs Werewolves - out in May 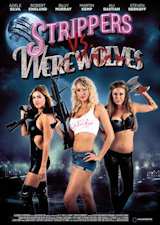 Coming to UK cinemas. At the Silvadollaz strip club, a stripper named Justice performs a private lap dance for Mickey, a man who violates the no-touching policy ... by sprouting fangs and claws and trying to eat her!  Justice panics and takes the only option open to her, she drives a silver fountain pen through Mickey's eye, into his brain, killing him instantly. Oops!
Jeanette, the clubs owner, believes murdering customers is bad for business, so she orders the clubs bouncer to quietly dispose of the body. There the matter should end ... if Mickey hadn't been a member of a bloodthirsty and vengeful pack of werewolves.
When Mickey's corpse surfaces, Jack Ferris, the werewolves charming and vicious leader, swears bloody vengeance and sends his pack out to hunt down the killers. Little does he know, Justice is actually the fiance of his second in command, Scott.  To make matters worse, Justice bites Scott during sex and now may be infected with the curse of lycanthropy herself.
Add to the mix werewolf Barker, the masturbating man-child; Sinclair, the occultist with low self-esteem; a bevy of the most beautiful women this side of heaven and you have the perfect recipe for balls to the wall, skimpily clad, strippers on werewolves action-packed goodness.
The film stars horror veteran Robert Englund, along with British TV actors Adele Silva, Martin Kemp, Billy Murray and pin-up model Lucy Pinder.
Strippers Vs Werewolves is a Black & Blue Production and is released in cinemas May 2012 by Kaleidoscope Entertainment.
View the trailer on YouTube "Here"

More info can be found at the "Kaleidoscope Films website"