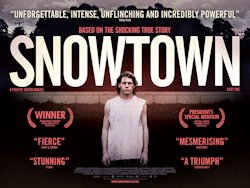 Justin Kurzel’s critically acclaimed debut feature film Snowtown comes to UK cinemas this month. A huge success at this year’s London Film Festival, the film documents the true story of serial killer John Bunting.
Sixteen-year-old Jamie longs for an escape from the violence and hopelessness that surrounds him in Adelaide's disenfranchised northern suburbs, and his salvation arrives in the form of John, a charismatic man who unexpectedly comes to his aid.

As John spends more and more time with Jamie’s family, he moves from the role of Jamie’s protector to that of a mentor, indoctrinating Jamie into his world, a world brimming with bigotry, righteousness and malice.
Like a son mimicking his father, Jamie soon begins to take on some of John’s traits and beliefs as he spends more and more time with him and his select group of friends. The protection and guidance that John presents to Jamie is initially welcomed however as events occur around him, including the disappearance of several people, Jamie begins to harbour deep suspicions about John and his motivations.
When the truth is finally revealed to Jamie his hopes of happiness are threatened by both his loyalty for, and fear of, his father-figure John Bunting, Australia’s most notorious serial killer. A nail-biting, highly acclaimed thriller, Snowtown marks the arrival of a major new filmmaking talent.
The film is released theatrically in the UK on Nov 18.
Visit the official website at http://www.snowtownfilm.com/
Posted by Dark Angel at 19:54