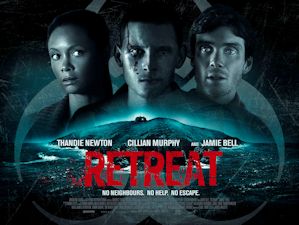 In a last-ditch attempt to save their failing marriage after the stillbirth of their first child, Kate (Thandie Newton) and Martin (Cillian Murphy), escape London for a retreat to the beautiful, yet remote and unpopulated Blackholme Island, which is off the west coast of Scotland.  Fairweather Cottage is a place where they once shared a romantic holiday and the island holds fond memories of happier times.
Their relationship is already fragile but anxieties are pushed higher when they lose all contact with the mainland and after a heavy storm, an injured man is washed up on the shore. Dressed in military fatigues and carrying a gun, the mysterious stranger regains consciousness and identifies himself as a British soldier called Private Jack Corman and he soon reveals that an airborne virus is sweeping Europe and all their lives are under threat unless they seal themselves in the cottage.
In a series of tense twists, the captive couple are forced to use their ingenuity to outwit the equally volatile and charismatic Jack in an attempt to unravel the real truth.  Loyalties divide and merge and paranoia sets in, culminating in a violent and shocking conclusion.
Retreat hits UK cinemas October 14th.