Fright-Rags is ready to party with new and classic apparel from The Return of the Living Dead, Alien, Aliens, and Sleepaway Camp II: Unhappy Campers.

Fright-Rags' The Return of the Living Dead collection is sure satisfy your hunger for more brains. It includes four new tees featuring Tarman, Trash, and Freddy, plus a new variant of the "TV Tarman" artwork and a fan-demanded re-print of a classic design. 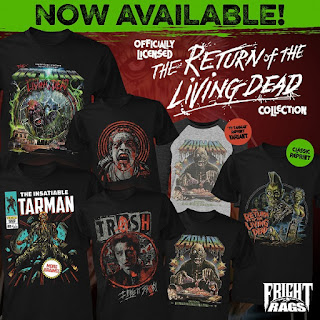 Ridley Scott's Alien and James Cameron's Aliens are two drastically different beasts, but both films are among the most revered in the sci-fi horror realm. Fright-Rags has six Alien/Aliens shirts to choose from: three new designs, two classic reprints, and a retro-style official Alien logo. 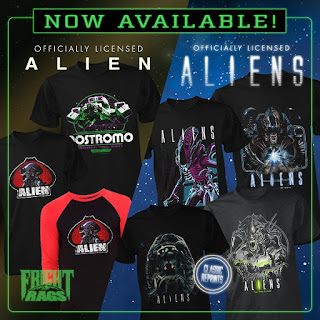 In honor of the 30th anniversary of Sleepaway Camp II: Unhappy Campers, Fright-Rags has reprinted Justin Osbourn's design for the slasher sequel. It's available in men's and, for the first time, women's styles. 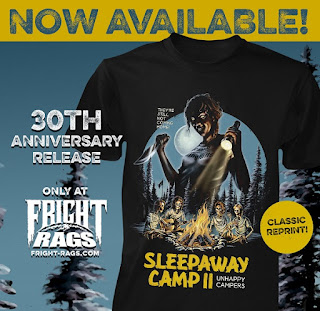 The Return of the Living Dead, Alien, Aliens, and Sleepaway Camp II apparel is on sale now at Fright-Rags.com.

Be sure to return to the site this Friday, August 31, for Fright-Rags’ latest “classick” reprint of Fright-Rags founder Ben Scrivens' What Would Jason Do? shirt, which will be available for three days only.