South Korea has become known for its gripping thrillers featuring psychopaths and serial killers yet Bluebeard offers something new as its mysteries unfold through the eyes of an increasingly unreliable narrator... 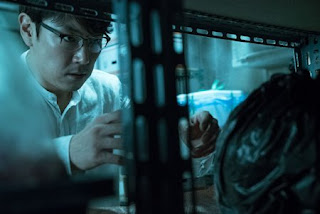 In a town with a history of unsolved murders, neurotic doctor Seung-hoon is given cause to believe the residents of the butcher shop he lives above are processing more than just meat after spotting a bloody bag and over-hearing a half mumbled confession. Could the creepy butchers possibly be a pair of serial killers or is the doctor losing his mind? In psychological thriller Bluebeard, director Lee Soo-yeon (The Uninvited) lays a trail of gruesome hints to keep the truth just out of reach of her paranoid protagonist.

Shouldering the burden of a plot rife with dramatic twists and chilling turns, lead actor Cho Jin-woong, recognisable to UK audiences from his role in Park Chan-wook’s The Handmaiden, provides a multifaceted performance as the fear-gripped doctor.

He’s ably supported by the superbly sinister duo of Kim Dae-myeong (Inside Men) and veteran actor Shin Koo (Christmas in August) as his ominous butcher-shop neighbours.

With Bluebeard, director Lee Soo-yeon utilises the cramped, claustrophobic environments of a city that’s simmering under a history of serial killings and unsolved murders to expertly crank up the tension until the film’s shocking finale.